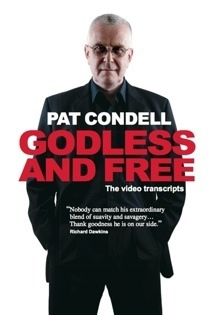 Hi, I’m Pat Condell. I don’t respect your beliefs and I don’t care if you’re offended. Cheers. Now that we’ve got the formalities out of the way, welcome to my website.

Patrick Condell (born November 23, 1949) is an English stand-up comedian, writer, and internet personality. He performed alternative comedy shows during the 1980s and 1990s in the United Kingdom and won a Time Out Comedy Award in 1991. He was also a regular panellist on BBC Radio 1’s “Loose Talk”. From early 2007, he began posting short monologues denouncing religion to a number of video sharing websites. His videos have been featured on many websites including YouTube and LiveLeak. They have also been published to DVD.

The Trouble with Islam